NCIS Database
Register
Don't have an account?
Sign In
Advertisement
in: Iraqis in NCIS, Recurring Characters in NCIS, Civilians in NCIS, Children in NCIS

Edit
watch 01:36
We're Getting Mutants in the MCU - The Loop
Do you like this video?
Play Sound

Anonymous was a Woman (episode)
Amira Shakarji is a young girl who is the daughter of Leyla Shakarji and deceased Marine Liam O'Neill, the granddaughter of Michael Franks and Shada Shakarji, as well as the goddaughter of former NCIS Special Agent, Leroy Jethro Gibbs.

Amira was born out of wedlock to Iraqi Leyla Shakarji and American Marine Corporal Liam O'Neill, most likely in Iraq in either 2006 or 2007. As a result, she and her mother were disowned for bringing shame on the family.

In 2007 Corporal O'Neill smuggled them out of Iraq and into the U.S., specifically to Washington, D.C. Unfortunately he was killed before he could get them from the pick-up point. Instead they were picked up by Michael Franks, who then brought Amira and her mother to his home in Mexico.

In Outlaws and In-Laws her paternal grandfather brings her and her mother to Gibbs' home for protection after two men attempts to kidnap them. It turns out her maternal grandmother, Shada Shakarji, is responsible and had hired a team of former Marines to retrieve them, claiming they had been kidnapped. 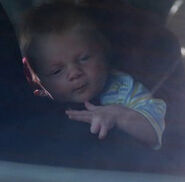