Ellick is a shipper term used to describe the possibility of a romantic relationship between NCIS Special Agents, Ellie Bishop and Nick Torres.

Ellie and Nick are the newest additions to Gibbs’s team following the departures of Ziva David and Tony DiNozzo respectively. Nick and Ellie start as friends, coworkers and teammates and always look out for each other. In Season 15, Nick and Ellie go undercover as a criminal couple and become much closer. Since then, Nick and Ellie begin to develop romantic feelings for each other, but have yet to act on their feelings. 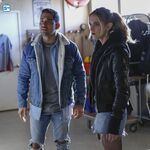 Add a photo to this gallery

Retrieved from "https://ncis.fandom.com/wiki/Ellick?oldid=176166"
Community content is available under CC-BY-SA unless otherwise noted.