Tori Anderson
Kate Whistler is a Special Agent with the Federal Bureau of Investigation. She was formerly an Officer with Defense Intelligence Agency or DIA for short, and Tara's love-interest turned girlfriend but broke up when she was still an DIA Officer then Whistler takes Ernie's advice and makes a grand gesture in the hope of winning Lucy back.

Kate attended Northwestern before joining DIA, her brother being former Captain Noah Whistler who died in an ambush in Taji, Iraq 2009.

She can speak in a Country Accent.

Kate can be a serious, and very straightforward person. But nonetheless she is a genuine, kind, and a soft person...at least with Lucy, but ever since they broke up their atitude is switched towards each other, Lucy is kinda "mean" to Kate but they became friends at the end 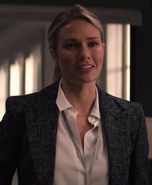