NCIS Database
Register
Don't have an account?
Sign In
Advertisement
in: Iraqis in NCIS, Recurring Characters in NCIS, Civilians in NCIS

Edit
watch 02:56
Doctor Strange in The Multiverse o Madness - The Loop
Do you like this video?
Play Sound

Anonymous was a Woman (episode)
Leyla Shakarji is a woman who is the daughter-in-law of Michael Franks and the mother of Amira Shakarji as well as the wife/widow of Liam O'Neill.

Leyla's boyfriend/fiancee smuggled her from Baghdad to Washington, D.C. due to fear of what the Shakarji family would do, as according to Shada Shakarji she brought shame on the family when she became pregnant with Liam O'Neill's child.

She is only seen breifly at the end of Iceman (episode), where she is sitting in the back of a taxi waiting to depart with Michael Franks and her young daughter Amira Shakarji.

According to Mike, Liam and Leyla were to be married but Liam was killed before they were able to do so.

Mike Franks brings Leyla and his granddaughter, Amira, from Mexico to Leroy Jethro Gibbs's home for protection after two men showed up at his home and attempted to take them.

In NCIS season four's Iceman (episode), Leyla was portrayed by an unknown black acress, but from season seven's Outlaws and In-Laws (episode) she is portrayed by acress Tehmina Sunny, who is of Indian descent. 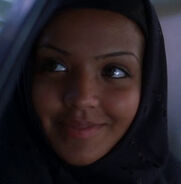 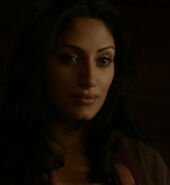 Leyla in S07's Outlaws and In-Laws
Community content is available under CC-BY-SA unless otherwise noted.
Advertisement